360 Video: Use the mouse to scroll the view when using a computer. For full immersion, watch using a virtual reality device and a 360 video player.

This visualization explores the Orion Nebula using both visible-light observations from the Hubble Space Telescope and infrared-light observations from the Spitzer Space Telescope. The contrast between visible and infrared views of the nebula is examined using two spatially matched, three-dimensional models. As the camera flies into the star-forming region, the sequence cross-fades back and forth between the visible and infrared views.

The glowing gaseous landscape has been illuminated and carved by the high-energy radiation and strong stellar winds from the massive hot stars in the center of the nebula. The infrared observations generally show cooler dust at a deeper layer of the nebula that extends well beyond the visible image. In addition, the infrared view showcases many faint stars that shine primarily at longer wavelengths. The higher resolution visible observations show finer details including wispy bow shocks and tadpole-shaped protoplanetary disks (or proplyds). In this manner, the movie illustrates the contrasting features uncovered by multi-wavelength astronomy. 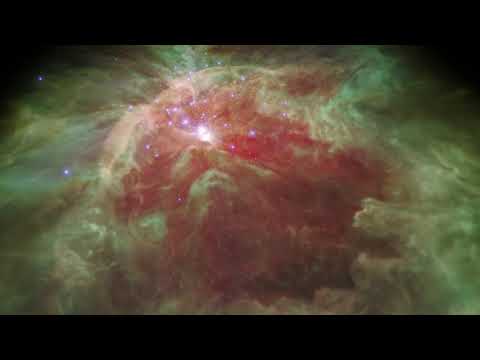 Flight Through the Orion Nebula in Infrared Light AstroViz: A 3D Flight through the Orion Nebula 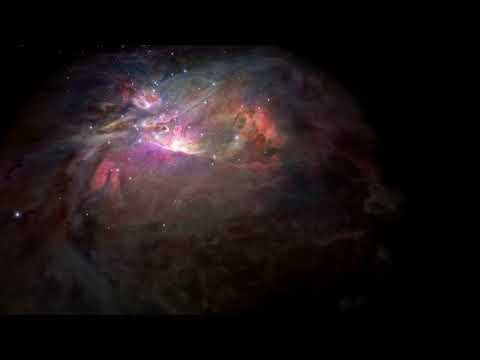 Flight through the Orion Nebula in Visible Light